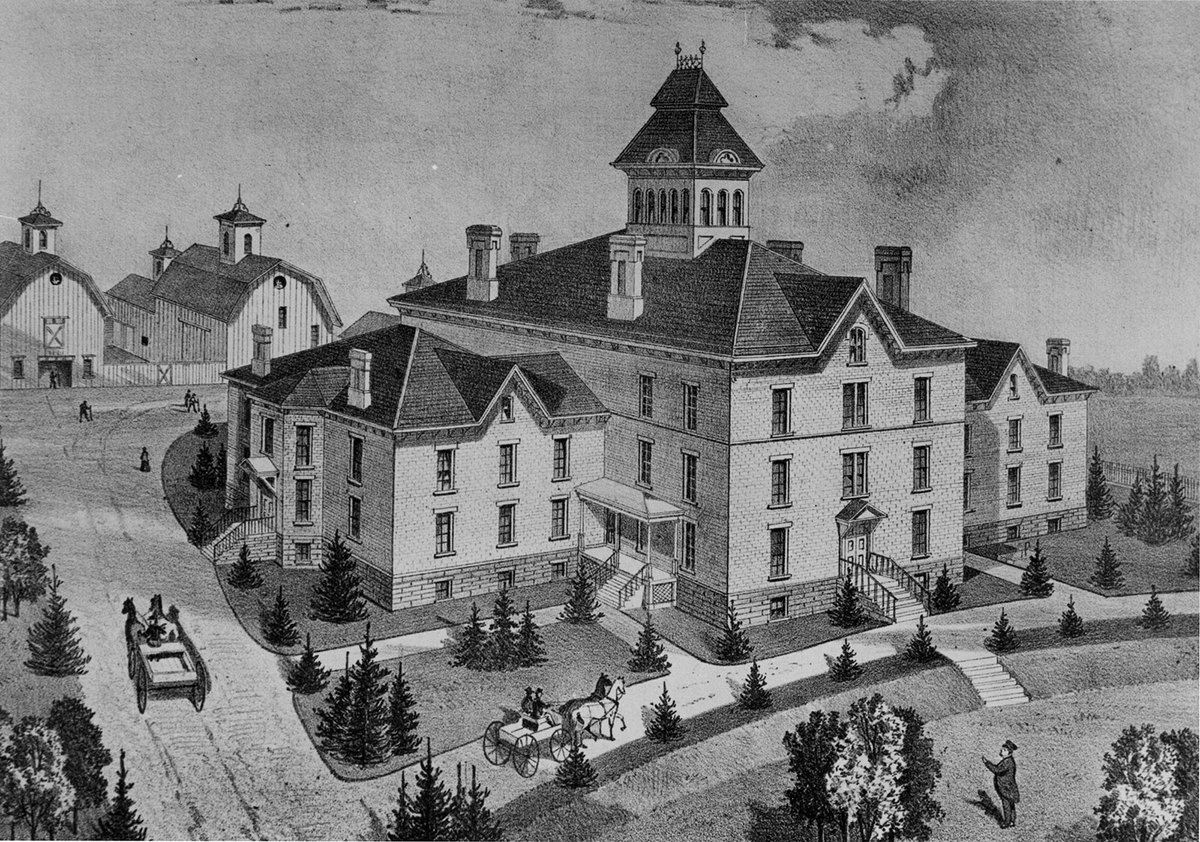 On May 18, 1878, a report was submitted to the Orleans County Board of Supervisors regarding the condition of the Poor House. On behalf of the committee, Supervisor John Hull White reported:

"...That they visited the County House on the 16th instant, and made a thorough examination of the buildings. In their opinion it would be unwise to attempt to repair the present structure. The north and south walls might answer by enlarging the windows therein, but the end walls are badly cracked from top to bottom; one of them to and through the stone foundation, and are sprung so as to be unsafe, in our judgment, to build upon.

If repaired, the end walls would have to be taken down and rebuilt; at one corner, the foundation would have to be removed; as the result of the bilge in the east end wall of the building the south-east corner leans in to the north; the peak of the west end wall leans in so that the inner tier of brick is at an angle of about forty degrees from the perpendicular; one of the king posts of the east bent, under the purlin plate is entirely rotted off and out of place so that that (sic) it gives no support whatever to the roof, and the braces at that place appear to be badly rotted; the roof leaks badly and in any event must be made entirely new, even to the timbers.

We express the unqualified opinion that the building is unsafe and there is great danger of it blowing down. The entire inner works must be removed and the floors raised in case it is repaired, the first floor being eight feet only in height and the second but seven. The floors are old and rickety and the doors and partitions are even worse if possible; the walls appear to be infested with vermin and there is no way to exterminate them except by building the walls anew. It is very certain we think that more room is required for the accommodation of the inmates. In one room seven feet high, we found sixteen cots, all of which, we were assured, were occupied every night, and the windows being very small; with no means of ventilation except the windows, it is easily imagined what the air must be during the night.

The wooden buildings, except the school house, are comparatively worthless for county purposes and are in such a shape that they cannot be made available. In short, our judgment is that it would be a foolish expenditure of money to attempt to repair the buildings which would necessarily be an expense of at least $5,000 to $7,000 and then they would be inadequate to the wants of the county and as they are, they are unfit to be the habitation of human beings though they may be poor and unfortunate. The county owes it to this class of unfortunates not only to support them, but to do it in a decent and respectable manner and not grudgingly.

It being apparent to us that it would be unsure to repair and that if repaired its capacity would be insufficient for our wants, we can but feel it our duty to recomend (sic) this Board should at once proceed to the erection of a plain, substantial structure for the accommodation of our poor.

Could the tax-payers of Orlerns (sic) County see the only public charitable institute in our midst as we have seen it, we believe there would be hardly a dissenting voice to this proposition."