The Case of Sarah Slocum

Of the many reasons why individuals became inmates of the Poor House, conceiving a child out of wedlock became a common cause of admittance for young women. A certain social stigma was attached to bearing children outside of marriage and women who did so were either sent to the Poor House for the latter portion of their pregnancy or cast out of their home with no means of support.

The case of Sarah A. Slocum represents one of those particular situations. Very little is known about who Sarah Slocum was or when and why she was admitted to the Poor House. More is known about Smith D. Shourds, a prominent coal dealer in Albion at the time and one can only speculate how the two came to know each other.

Shourds appears to have wasted no time in "compromising" with John F. Sawyer about the care and maintenance of Sarah and her child. According to Sawyer's documentation, Shourds paid him $50 and signed over a mortgage valued at $200 to cover expenses relating to the maintenance of the mother and child during their stay at the Poor House. When Willard Polly married Slocum in March of 1854, less than a month after the birth of her child, Sawyer deducted the amount expended for her care and gave her the remaining $20.

This is the only documented case involving a bastard child where the alleged father quickly paid to cover expenses for the child's care. 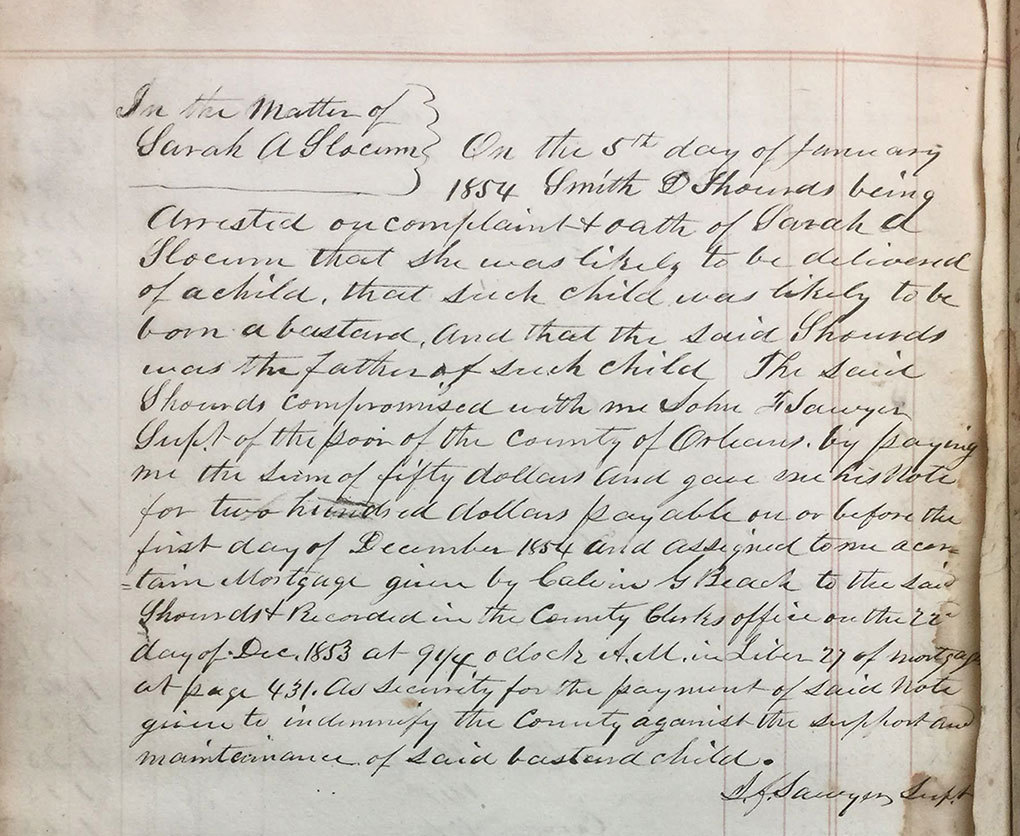 {In the matter of Sarah A. Slocum}

"On the 5th day of January 1854 Smith D Shourds being arrested on complaint + oath of Sarah A Slocum that she was likely to be delivered of a child, that said child was likely to be born a bastard, and that the said Shourds was the father of such child. The said Shourds compromised with me John F Sawyer Supt. of the Poor of the County of Orleans by paying me the sum of fifty dollars and gave me his note for two hundred dollars payable on or before the first day of December 1854 and assigned to me a certain Mortgage given by Calvin G. Beach to the said Shourds + recorded in the County Clerks office on the 22nd day of Dec. 1853 at 9 1/4 o'clock A.M. in Liber 27 of mortgage at page 431 as security for the payment of said note given to indemnify the County against the support and maintenance of said bastard child." 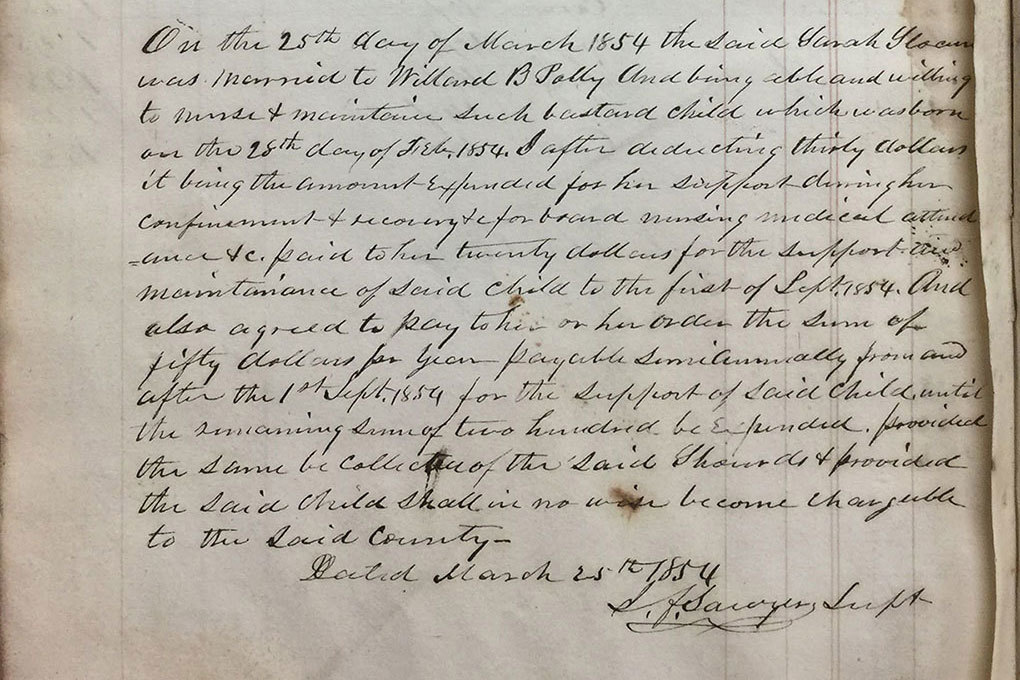 "On the 25th day of March 1854 the said Sarah Slocum was married to Willard B Polly and being able and willing to nurse + maintain such bastard child which was born on the 28th day of Feb. 1854. I after deducting thirty dollars it being the amount expended for her support during her confinement + recovery + for board nursing medical attendance + paid to her twenty dollars for the support and maintenance of said child to the first of Sept. 1854. And also agreed to pay to her or her order the sum of fifty dollars per year payable semi-annually from and after the 1st Sept. 1854 for the support of said child until the remaining sum of two hundred be expended provided the same be collected of the said Shourds + provided the said child shall in no way become chargeable to the said County."